After incorporating May data on the Treasury Department’s cash flows and reviewing the outstanding “extraordinary measures” that remain at the Treasury secretary’s disposal, BPC is maintaining its projection that the debt limit “X Date,” when the federal government would not be able to pay all its bills in full and on time, will fall sometime in October or November 2017.

Since March 16, 2017, the Treasury has been using so-called “extraordinary measures” to avoid missing or delaying federal payments while the federal government operates at the debt limit. Eventually, if policymakers do not act to raise or suspend the limit, those measures and the Treasury’s remaining cash on hand will be exhausted.

In general, days of large scheduled payments have an outsized chance of triggering the “X Date.” Within our range, October 2 is one particularly risky day, when a large payment is due to the military retirement trust fund.

If policymakers do not act… Treasury’s remaining cash on hand will be exhausted.

Federal revenues have thus far grown slower than projected for the year by the Congressional Budget Office, but the underperformance has not been large enough for BPC to change its “X Date” range at this time. The cause of this slower-than-expected revenue growth remains unclear. In May, CBO suggested that taxpayers may be shifting their income to later years, anticipating that tax reform would result in lower future tax rates. Treasury Secretary Steven Mnuchin alluded to this as well in comments last week. Current publicly available data are not granular enough to confirm the explanation for lower-than-expected tax revenues, and therefore, to definitively forecast whether such a pattern will continue.

BPC always emphasizes that its projections cannot anticipate major economic or legislative changes. If the revenue trend seen in recent months becomes more pronounced into the summer, it could move our “X Date” projection range in an earlier direction. A key upcoming data point will be tax collections in June, when quarterly tax payments are due from certain individuals and corporations. 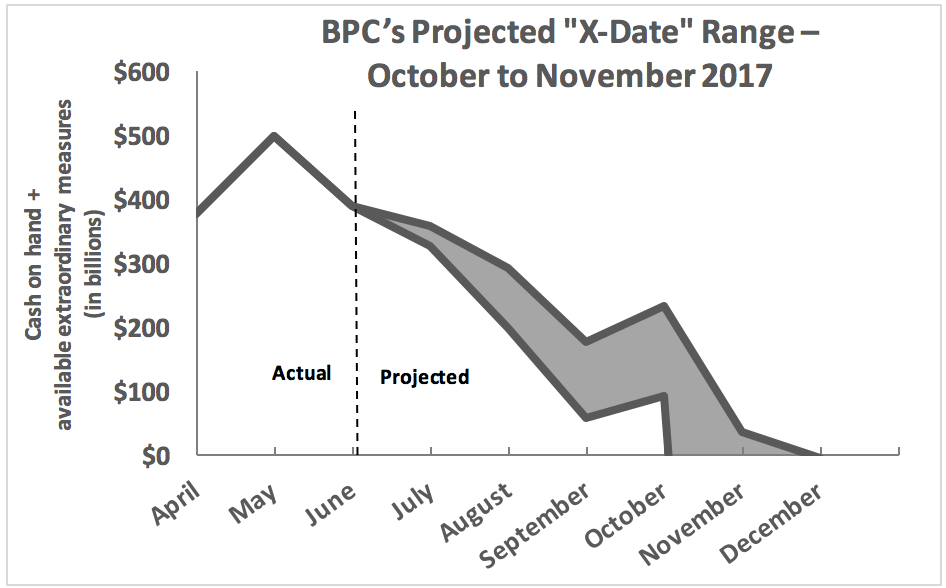 The “X Date” Is Not a Typical Deadline

While BPC projects the time period in which the “X Date” is expected to surface, that range should not be viewed as the deadline by which Congress needs to act to avoid any debt limit related consequences. Costs are actively accruing daily, most obviously in the form of Treasury Department employees’ time as they monitor cash flows and manage the use of extraordinary measures. More significantly, in past years, as Treasury approached the “X Date,” interest rates increased, costing the federal government tens of millions of dollars in 2013 alone, according to a Government Accountability Office study. Political fights in 2011 delayed the raising of the debt limit, and even though no payments were missed, the Standard & Poor’s rating agency downgraded the credit rating of the United States. Further debt limit brinkmanship could cause additional downgrades to the U.S. credit rating, with negative consequences for federal borrowing costs, financial markets, and the economy.

BPC is maintaining its projection that the debt limit “X Date,” will fall sometime in October or November 2017.

In addition, BPC’s projections are subject to substantial uncertainty. There is always a chance that the “X Date” will fall outside BPC’s projection range, a concern that has implications for policymakers. For example, if the “X Date” were to occur earlier than projected, Congress’s ability to act prior to it would be limited by the congressional calendar. Both houses of Congress are scheduled to go on recess in August. If extraordinary measures run out before BPC’s October to November range, policymakers who wish to ensure that the government does not miss or delay any payments would have limited time in September to enact legislation. In such a case, a desire for quick action on the debt limit might run up against other deadlines and priorities, including the consideration of appropriations for Fiscal Year 2018 (which must be passed by the end of September to avoid a partial government shutdown), tax reform, and health care reform. This uncertainty is an important factor as policymakers consider a timeline for action on the debt limit.