The Bipartisan Policy Center’s (BPC) Estimated X Date Range: February 28 ? March 25 (with high probability for the X Date to occur on or before March 14)

The debt limit, which has been suspended since October 17, is scheduled to be reinstated on February 8. At that time, the nation will be operating right at the debt limit, and the Treasury Department will use extraordinary measures to temporarily issue additional public debt to meet federal financial obligations. These measures will only last a limited time, a much shorter period of time than during the last occasion they were used in May-October 2013. Approximately $198 billion of extraordinary measures will be available this time.

Absent action by policymakers, there is a very real chance that Treasury would not have sufficient cash-on-hand to cover all obligations due as soon as February 28. Because February historically has a high cash deficit, due to the start of tax-filing season and the payment of income tax refunds, extraordinary measures will be exhausted quickly. The delay in the tax filing season, resulting from the government shutdown, has exacerbated this situation. After that point, Treasury would no longer have any borrowing authority ? a situation that would be unprecedented in the modern era ? and all obligations would have to be paid out of cash-on-hand and incoming revenues. Extraordinary measures could well be exhausted before February 28. The risk of serious, negative financial market and economic consequences would rise significantly in an environment where Treasury has no capacity to borrow additional funds to meet unforeseen challenges.

Subsequently, unless the debt limit is increased or suspended, there would soon come a day when Treasury does not have enough cash to pay all bills in full and on time, and the government would be forced to default on some of its obligations. BPC refers to this date as the “X Date.” 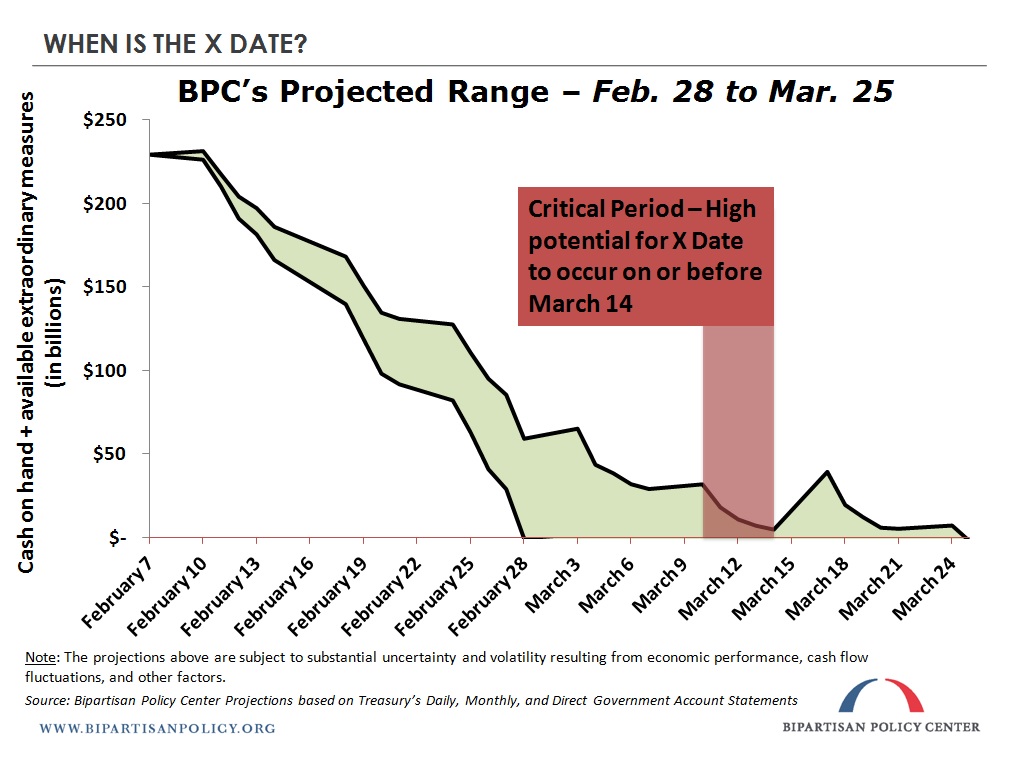 BPC now projects that the X Date will likely occur between February 28 and March 25. However, even under a very optimistic scenario, the government would be less than $5 billion away from the X Date on March 14. To put this in perspective, one day’s spending in March would typically be more than $10 billion. As such, there is a high probability that the X Date could occur on or in the days before March 14. If Treasury is able to get past Friday, March 14 without exhausting cash-on-hand, receipt of corporate income taxes due on Monday, March 17 could buy another week or so. But a scenario in which the X-Date occurs after March is extremely unlikely.

BPC’s estimated range can be thought of as a confidence interval. Although unlikely, there is a small chance that the X Date could fall outside of this range ? either earlier or later. At this time, it is not possible to provide a more precise estimate. This is because the amount and timing of cash flows are especially volatile in February and March due to the payment of income tax refunds, which can range each day from as low as $2 billion to higher than $13 billion.

If policymakers want to avoid reaching the X Date, they should act well in advance of the February 28 beginning of BPC’s projected X Date window.

Significant financial transactions are scheduled to occur in the February 28 ? March 25 period and beyond. On February 28, both a $17 billion payment to Medicare plans and a $5 billion interest payment on the public debt are scheduled, along with smaller payments for military pay and veterans benefits. On March 3, a $26 billion Social Security payment is due, and $12 billion Social Security payments are due on March 12 and March 19. Absent an increase or suspension of the debt limit, Treasury’s ability to make those payments in-full and on-time would not be guaranteed.

As of late January, Treasury is scheduled to roll-over about $250 billion of maturing securities in the month of March, and this amount will increase as Treasury schedules additional short-term auctions in the days ahead. As the X Date approaches without action on the debt limit, one risk is that buyers of government debt will be less likely to participate in Treasury auctions and, for those that continue to participate, more likely to demand higher interest rates, increasing the cost of servicing the existing debt. Past analysis from BPC and the Government Accountability Office shows that the debt ceiling confrontation in 2011 cost American taxpayers $1.3 billion in Fiscal Year 2011 and $18.9 billion over a decade. At least a similar, if not greater, cost could occur in this standoff simply because the total level of debt outstanding and subject to risk is 20 percent greater today than it was in 2011.

BPC will continue to update and refine our debt limit analysis as new information becomes available.

To learn more about how extraordinary measures are used to provide temporary, additional borrowing authority when the U.S. is operating at the debt limit, visit our new explanatory document and video: