Update as of 4:30 p.m. ET, July 12, 2016: An amendment in the form of a substitute offered by Chairman Brady has made several changes to H.R. 711, two of which are particularly noteworthy. First, the WEP change would begin for beneficiaries newly eligible in 2018 (compared to 2017 under the previous version). Second, the amendment removes the enforcement provisions for previous overpayments, fully addressing the second “concern” articulated below about confusing penalties. Enforcement of overpayments would remain the same as under current law.

The Equal Treatment of Public Servants Act (H.R. 711) would replace the current windfall elimination provision (WEP) formula that applies to Social Security beneficiaries who have worked in “uncovered” employment. Examples include police officers, firefighters, teachers and other state and local government workers whose employers do not withhold Social Security taxes from their salary. Today, if a person receives a pension from this type of uncovered job, their Social Security benefits may be reduced by the WEP.

In lieu of the WEP, H.R. 711 would apply a simple, proportional adjustment to benefits based on the percentage of a beneficiary’s total earnings (from their 35 highest-earning years) that were earned in uncovered employment. The graphic below illustrates step-by-step how a primary insurance amount (PIA) (which is the value of an individual’s monthly Social Security benefit if they claim at the full retirement age) would be calculated for workers with a history of both covered and uncovered employment if H.R. 711 were adopted.1 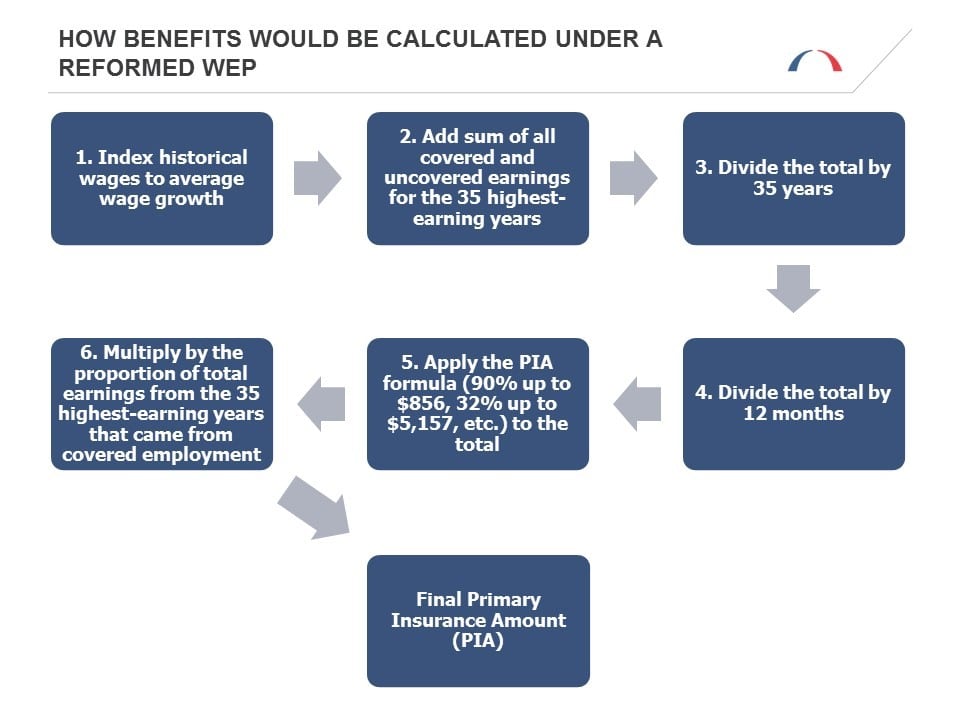 While this reform on its own would result in modest net savings to Social Security over the 75-year projection period, H.R. 711 would use these savings to provide rebates for individuals currently being adversely affected by the WEP, thus making the legislation budget-neutral over the first ten years. The majority of these beneficiaries would likely be eligible for higher benefits under the reformed WEP proposal, and this rebate is meant to help reflect that by mitigating the impact of the current WEP.2

What are some concerns raised about H.R. 711 and how could they be alleviated?

Two particular concerns have been raised about H.R. 711 that merit additional consideration:

1. H.R. 711 would repeal the provision in current law that caps a beneficiary’s WEP impact at half of their monthly pension income. As the WEP is structured today, this provision is especially important, because it protects individuals who worked in uncovered employment for a few years but not enough to earn a significant (or any) pension. Such a protection, however, is somewhat less critical when benefits are reduced proportionally based on lifetime earnings, because beneficiaries with fewer uncovered earnings will automatically be less impacted by the reformed WEP. Even so, lawmakers should consider how to most equitably apply this reform to individuals whose time in uncovered employment provides them little to no additional pension income.

2. The Social Security Administration (SSA) currently relies upon former state and local employees to self-report their pension income so that the agency can determine how large of a WEP reduction to apply. Up until recently, this has been difficult to enforce due to a lack of historical data about earnings from uncovered employment. H.R. 711 would allow SSA to request certification from current beneficiaries who it now knows have a history of uncovered earnings but who haven’t reported any pension income. Those individuals would need to certify that they in fact do not have any pension income. If the beneficiary does not verify this to SSA, or reports previously unreported pension income, the WEP can be applied to their benefits retroactively?possibly resulting in the beneficiary being on the hook for repaying thousands of dollars in “overpaid” benefits. This could cause unnecessary financial stress for older Americans who confusingly find themselves in this situation.

To be clear: repayment of these overpaid benefits is already “owed” under current law; H.R. 711 merely provides SSA better means to enforce these debts. Nonetheless, both lawmakers and SSA should ensure that this law is written and enforced in such a way that does not result in unfair or unexpected penalties for potentially vulnerable retirees who had no intention of misleading the government about their finances.

Replacing the WEP has multiple advantages. Proportionally adjusting benefits based on an individual’s work history is far more equitable and simpler than an arbitrary PIA-factor adjustment, which is what the current WEP does. In addition, the statement of benefits that an individual receives before claiming Social Security doesn’t adequately reflect the impact of the WEP (as the WEP is not currently calculated before beneficiaries begin receiving outside pension income); adopting H.R. 711 would correct this problem and provide more transparency and advance notice to beneficiaries.

BPC’s Commission on Retirement Security and Personal Savings included a WEP replacement similar to H.R. 711 as part of its comprehensive recommendations to improve retirement security in America, including strengthening Social Security and making it sustainable. In the scheme of such a package, this change is a relatively small but important one. The commission’s proposal also included a number of additional safety net provisions to protect vulnerable beneficiaries who might actually see small reductions under a reformed WEP. We therefore encourage policymakers not to stop here, but rather to let this be the first of many improvements to Social Security and retirement security overall.

1
Technically, a hypothetical PIA would first be calculated based on the average indexed monthly earnings (AIME) that an individual would have if all their earnings were covered (a so-called “Super AIME”). Social Security would then divide this hypothetical PIA by the Super AIME to yield a replacement rate. Finally, this replacement rate would be applied to the individual’s actual AIME (which only includes earnings from covered employment). The above graphic uses a slightly simpler methodology, which yields the same final PIA.

2
This proportional-adjustment method was not adopted when the WEP was enacted in 1983 because, at the time, the Social Security Administration did not have complete data on uncovered earnings. SSA now has better records, and individuals turning age 62 in 2017 will be the first cohort for whom SSA will have full records of uncovered earnings.

One Social Security Reform that Democrats and Republicans Agree On