The surge of children and families from Central America arriving at the U.S.-Mexico border may have been last year’s top immigration story. After the total number of apprehensions along the southwest border declined precipitously between fiscal year (FY) 2005 and FY 2011, the last fiscal year marked the third straight year that apprehensions rose. The increase was driven by migrants from countries other than Mexico. Even as apprehensions of Mexicans declined by about 170,000 between FY 2010 and FY 2014, apprehensions of people from other countries increased by more than 200,000.

Data on the first four months of the current fiscal year suggest that these trends may have reversed. According to The Wall Street Journal, apprehensions through the first four months of FY 2015 were about 22 percent lower than the same period in FY 2014 (97,667 versus 125,404). Reduced numbers of unaccompanied children (UC) and Central Americans appear responsible for this trend. However, it is unclear whether the reduced number of people being caught at the border means that fewer people are successfully entering illegally.


Figure 1. Monthly UC apprehensions versus one and two years earlier. 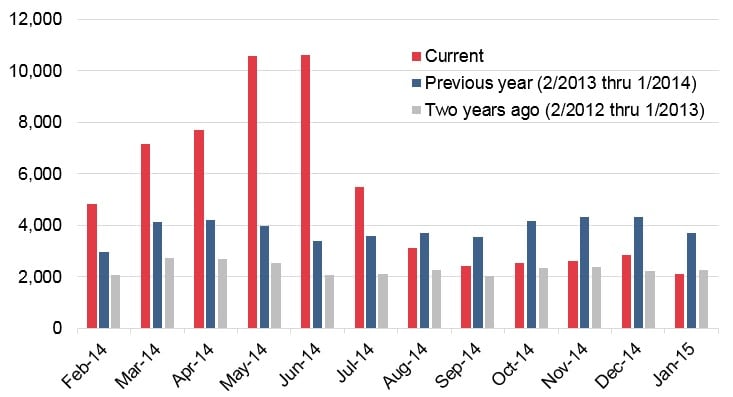 Overall, UC apprehensions have declined by 39 percent compared with the first four months of FY 2014; for all other types of apprehensions, the decline was 20 percent. The decline in UC apprehensions appears to be driven by reduced migration from El Salvador and Honduras. Compared with full-year figures for FY 2014, UCs from these countries appear to be arriving at a much slower pace than last year, while UCs from Guatemala and Mexico appear to be arriving at a similar rate.1

Last year, for the first time ever, people from countries other than Mexico made up the majority of apprehensions at the U.S.-Mexico border. Through the first four months of FY 2015, the percentage of apprehended migrants not from Mexico fell to 40 percent?still much higher than historical averages, but below last year’s record pace (Figure 2). A large majority of non-Mexican migrants apprehended at the U.S.-Mexico border are Central American.

Because monthly data on Mexican versus non-Mexican apprehensions are not available, it is not possible to compare the first four months of FY 2015 to the first four months of previous years. This means the comparison does not reveal seasonal trends. For instance, if cold weather in the winter deters Central Americans from travelling longer distances, the proportion of non-Mexicans could climb during the summer months. If one were to lay aside potential seasonal effects and assume that the proportion of non-Mexicans did not change throughout FY 2014, the data would imply that non-Mexicans made up the large majority of the total decline in apprehensions.2

Does this mean fewer people are crossing the border?

The numbers do not provide enough evidence to conclude whether more people are successfully entering the country. As explained in our recent report, Measuring the Metrics: Grading the Government on Immigration Enforcement, the number of apprehensions has historically been used as an indicator of many things it does not actually measure: namely, how many people are trying to cross the border and how many people succeed. The only thing it actually measures is how many times people are caught. To estimate the number of times people succeeded, it is necessary to combine the number of apprehensions with an estimate of the “probability of apprehension,” or the chance that someone will be caught. For example, if the probability of apprehension is 60 percent, and there were 600,000 apprehensions, one can estimate that there were 400,000 successful entries.

The available data are a positive sign for those who were concerned about the surge of children and Central Americans last summer. However, as we concluded in Measuring the Metrics, more detailed data?in this case, monthly numbers on non-Mexican apprehensions and “known flow” estimates of successful illegal entries?would allow more certain conclusions about what the numbers mean.

New immigration enforcement data: for the first time in history, most border crossers are not Mexican