While much of the recent news coverage describes Congress as gridlocked and partisan, there were two victories last week for energy efficiency that demonstrate the plausibility of bipartisanship and collaborative action. Last Wednesday, two members of the U.S. House of Representatives created the Energy Savings Performance Caucus, a bipartisan caucus to promote energy saving policies. That same week, the U.S. Senate and House passed with overwhelming support the American Energy Manufacturing Technical Corrections Act, an energy efficiency bill that amends specific appliance efficiency standards and bolsters industrial and federal government efficiency efforts.

Created and led by Representatives. Cory Gardner (R-CO) and Peter Welch (D-VT), the Energy Savings Performance Caucus is currently composed of eleven House members and works to promote energy saving policies. The caucus plans to focus initially on improving the efficiency of the federal government, building on the efforts of President Obama’s administration. In December 2011, Obama issued a memo committing federal agencies to enter into at least $2 billion in Energy Saving Performance Contracts over the next two years to improve the energy efficiency of federal buildings. Gardner and Welch want to expedite and expand this process, citing the huge potential for efficiency savings.

Gardner and Welch both touted the viability of promoting energy saving policies in this time of budget shortfalls and intense partisanship. Energy efficiency measures often do not require large, new appropriations and also have a broad base of support with endorsement from both sides of the aisle, as evidenced by the the recent Shaheen-Portman proposal in the Senate and Bass-Matheson legislation in the House.

Welch highlighted this support by saying, “?What we can do that would be really helpful is to focus on the efficiency space where there is some common agreement and measurable results and benefits.”

Also last week, the Senate and House passed with bipartisan support the American Energy Manufacturing Technical Corrections Act (H.R. 6582), a bill that reworks some specific appliance efficiency standards and augments industrial and federal government efficiency efforts. The legislation was approved unanimously in the Senate and only had two dissenters in the House (398-2).

Many of the original provisions of the Shaheen-Portman legislation were not included in the legislation in an attempt to ensure broad Congressional support (see Figure 1). 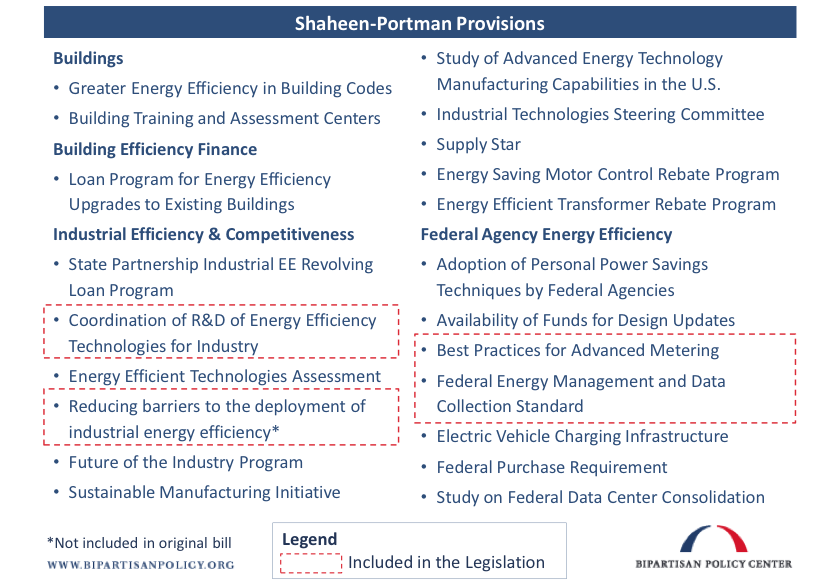 Representative Ed Whitfield (R-KY) touted support for multiple facets of the bill passed last week by saying, “This bill will reduce regulatory burdens and provide greater certainty for manufacturers, allowing them to stay in business, avoid layoffs and will also ensure the continued benefits of energy savings and consumer savings because of increased energy efficiency.”

While these actions are limited in scope and reach, the new caucus and legislation represent important victories for both bipartisanship and energy efficiency. Many lawmakers have indicated that they want to continue to advocate for and pass more bipartisan energy efficiency policies in the next Congress.