The final omnibus appropriations bill for fiscal year 2016, which Congress passed this week, includes strong language for the Department of Homeland Security (DHS) on measuring its work on immigration enforcement and border security. The adoption of such a set of metrics could help ground the border security and immigration reform debate in better data and concrete facts.

Earlier this year, Senate appropriators included a detailed set of requirements in the Senate Appropriations Committee report for DHS that closely followed recommendations (see table) from BPC’s study Measuring the Metrics: Grading the Government on Immigration Enforcement, and the House Appropriations Committee also included requirements for better metrics. The final explanatory statement for the DHS section of the omnibus bill requires the Office of Immigration Statistics to develop and oversee “the implementation of a plan to collect, analyze and report appropriate data” on immigration enforcement activities. The report is to include data on the “full scope of immigration enforcement activities, from encounter to final disposition, including the use of prosecutorial discretion.” The statement also includes specific language for better border security “performance management and domain awareness,” which shall include outcome-based metrics.

Consistent with the BPC report’s recommendations, the final language also states that the plan “should result in a consistent set of outcome-based metrics?which can be regularly and publicly released.” [emphasis added]. Public release of this data is important to ensure both transparency and accountability. The public and legislative debate over border security has been severely hampered by unclear, minimized and opaque data that make it difficult to reach agreement on the actual state of enforcement and border security.

While the final report language did not detail the specific metrics to be included in the plan, there is enough there for the public and the appropriators to demand more and better information about how the government is spending its resources in enforcing immigration laws and securing the border. With better information, all sides in the immigration debate can begin to focus on necessary changes, rather than arguing over the data. 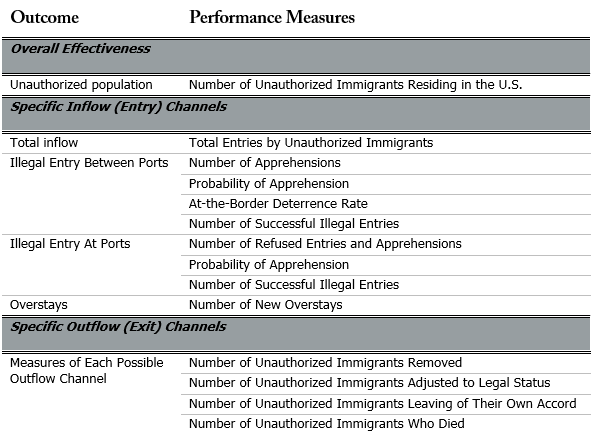