Both bills have been introduced during previous sessions of Congress with similar bipartisan support. The I-Squared Act was introduced during the last Congress, but at the time the Senate was focused on its efforts to put together a comprehensive immigration bill, S.744. The proposed reforms are broadly similar to those contained in S.744 and other high-skilled reform legislation over the past few years (e.g. the SKILLS Visa Act in the House). Below is a summary of the major provisions of the I-Squared Act an the Startup Act, as well as a table comparing them to similar provisions in two past legislative reform efforts:

View a larger version of this chart 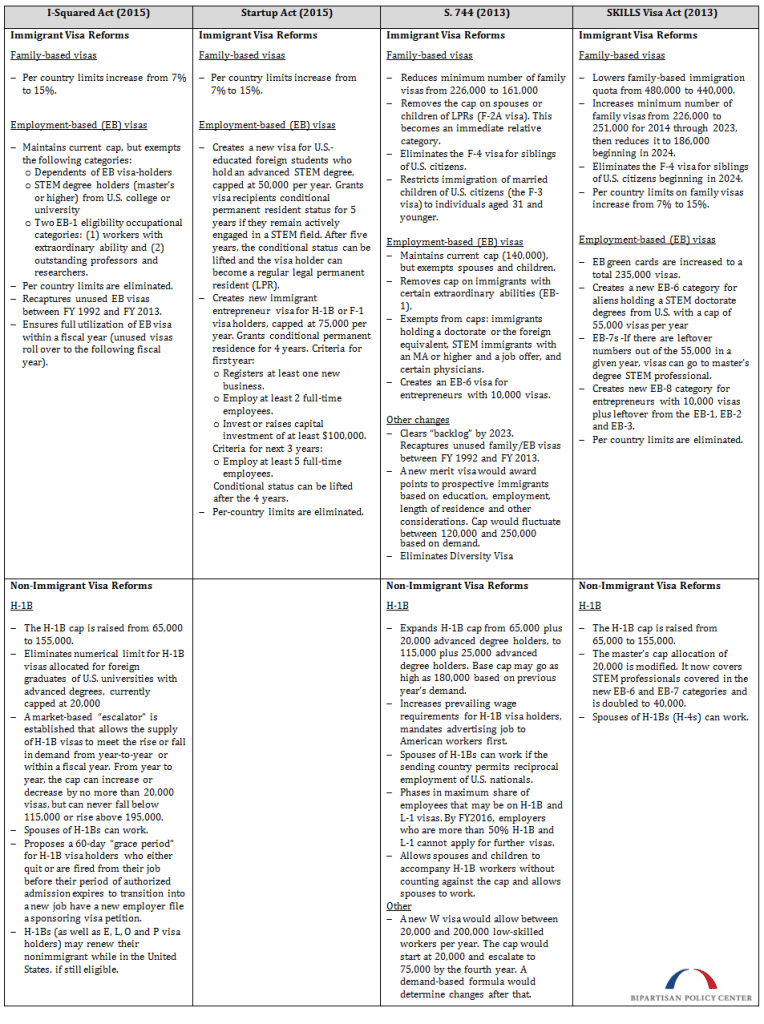 H-1B Visa Program
Cap. The H-1B cap, which is frequently hit relatively quickly, would increase from 65,000 to 115,000 visas per year. The bill would eliminate the numerical limit for H-1B visas allocated for foreign graduates of U.S. universities with advanced degrees, currently capped at 20,000 additional visas. A market-based “escalator” would allow the supply of H-1B visas to meet the rise if the current year’s demand is high or fall if the previous year’s demand was low, determined by the number of submitted visa petitions. From year to year, the cap could increase or decrease by no more than 20,000 visas, but could never fall below 115,000 or rise above 195,000. If usage at the end of a fiscal year is at least 5,000 below that year’s cap, the following year’s cap would decrease based on how many visas went unused; for example, if between 10,000 and 14,999 visas go unused, the next year’s cap would fall by 10,000 visas. The bill also allows the H-1B cap to increase based on demand in the same fiscal year. For example, if the H-1B cap is hit during the first 45 days petitions may be filed for the fiscal year, an additional 20,000 visas would be made available on the 46th day.

Dependents. Spouses of H-1B visa holders would have the opportunity to apply for work authorization. Currently, spouses of H-1Bs are not allowed to work in the United States.

Worker mobility and visa revalidation. Currently, there is no transition period for H-1B workers to change jobs and also retain their legal status. The bill proposes a 60-day “grace period” for H-1B visa holders who either quit or are fired from their job before their period of authorized admission expires. The H-1B worker would have up to 60 days to transition into a new job and have a new employer file a sponsoring visa petition. Lastly, H-1B visa holders (as well as E, L, O, and P visa holders) may renew their nonimmigrant status while in the United States, if still eligible.

EB Visas
Exemptions from EB visa caps. I-Squared exempts several categories of foreign nationals from being counted against the numerical limit placed on the number of EB visas that can be issued in a fiscal year. The following categories of aliens are exempt from the cap:

The last two categories are currently occupational categories in the EB First preference category. While I-Squared does not technically increase the EB cap (currently at 140,000), exempting these groups of immigrants would free up a significant amount of visas in a given year. For example, in 2013, 53 percent of all EB visas issued (or about 85,000 out of 161,000) went to the children and spouses of the principal worker. Exempting dependents from the numerical limit alone would essentially double the amount of workers entering the country with an EB green card.

Green card recapture and full utilization. In order to reduce visa backlogs, the bill calls for the recapture of unused EB visas for fiscal years 1992 through 2013, to be used beginning in FY 2016. Going forward, it calls on the Department of Homeland Security (DHS) and Department of State to ensure that every EB visa authorized to be used within a fiscal year is issued to a qualified applicant. Any unused EB visas would roll over to the following fiscal year. According to U.S. Citizenship and Immigration Services (USCIS), over 500,000 EB visas were unused between FY 1992 and FY 2009, 180,000 of which were recaptured by previous legislation.

Student visas
I-Squared would allow so-called “dual intent” for foreign students studying in U.S. colleges and universities with an F nonimmigrant visa. By removing the requirement that such students establish they have no intention to abandon their foreign residency as a condition of their status, foreign students in the country would be able to pursue a permanent green card before graduating.

Stem Education Funding
I-Squared would increase H-1B and EB green card petition fees to create a new grant program, the “Promoting American Ingenuity Account.” The grant program would be administered by the states and used to strengthen STEM education, recruit, train and retain teachers in STEM fields, and help college and university initiatives to produce more graduates in fields needed by U.S. employers. Although 95 percent of the money would be allocated to the states through an application process, 2 percent would fund Department of Education research, development and evaluation activities, and 3 percent would be used to establish “American Dream Accounts,” designed to help low-income students save and prepare for a college education in a STEM field.

EB Green Cards
STEM visa. The bill creates a new permanent visa category for U.S.-educated foreign students who hold an advanced degree in a STEM field. The new category, capped at 50,000 per year, would grant visa recipients conditional permanent resident status for five years if they remain actively engaged in a STEM field. During this time, the immigrant must be teaching a STEM field course at a college or university, be employed in a business or nonprofit in a STEM field, or be employed by a local, state or federal government entity. The conditional status can be lifted after five years if the holder has met those conditions, which would make the immigrant a regular legal permanent resident (LPR) or green card holder. If the conditions are not met, the individual would be denied status and be subject to removal.

During the following three years the immigrant must employ at least 5 full-time, non-family member employees. After four years, if all of these conditions are met, conditional status can be lifted and a permanent green card issued.

It remains unclear whether these bills will be considered in committee or brought to the floor any time soon. The bills also may face some challenges from members weary of increasing legal immigration or expanding the H-1B program without adding further restrictions or protections. Senator Chuck Grassley, for example, the current chairman of the Senate Judiciary Committee, has repeatedly pushed to tighten up restrictions on H-1B visas and ensure that U.S. workers are prioritized first. However, both bills represent bipartisan efforts to make critical reforms to the legal immigration system by reducing the substantial backlogs and opening legal pathways for immigrant STEM students and entrepreneurs remain in the country to work and invest.

H-1B Visa Cap Expected to Be Hit Within Days—Again