Here are some key takeaways from the white paper, America’s Long-Term Care Crisis, which provides a critical framework from which to begin our work.

Need for LTSS Will Grow Dramatically

As the population ages, especially the baby boom generation, the demand for LTSS ? defined as institutional or home-based assistance with activities of daily living such as bathing, dressing, or medication management ? will increase significantly. The number of Americans needing LTSS is expected to more than double from 12 million in 2010 to 27 million in 2050. Moreover, public and private spending for delivering LTSS to older Americans is expected to nearly triple from 1.3 percent to 3 percent of U.S. Gross Domestic Product (GDP) over that same time. While an aging population will be the main driver of future growth in LTSS spending, there will continue to be substantial demand for LTSS for individuals with disabilities under 65, who make up about half of the population needing services today. How we deliver and pay for LTSS is important to many stakeholders, including those needing services (both over and under 65 years of age), family members and friends, paid caregivers, private insurers, states and the federal government. 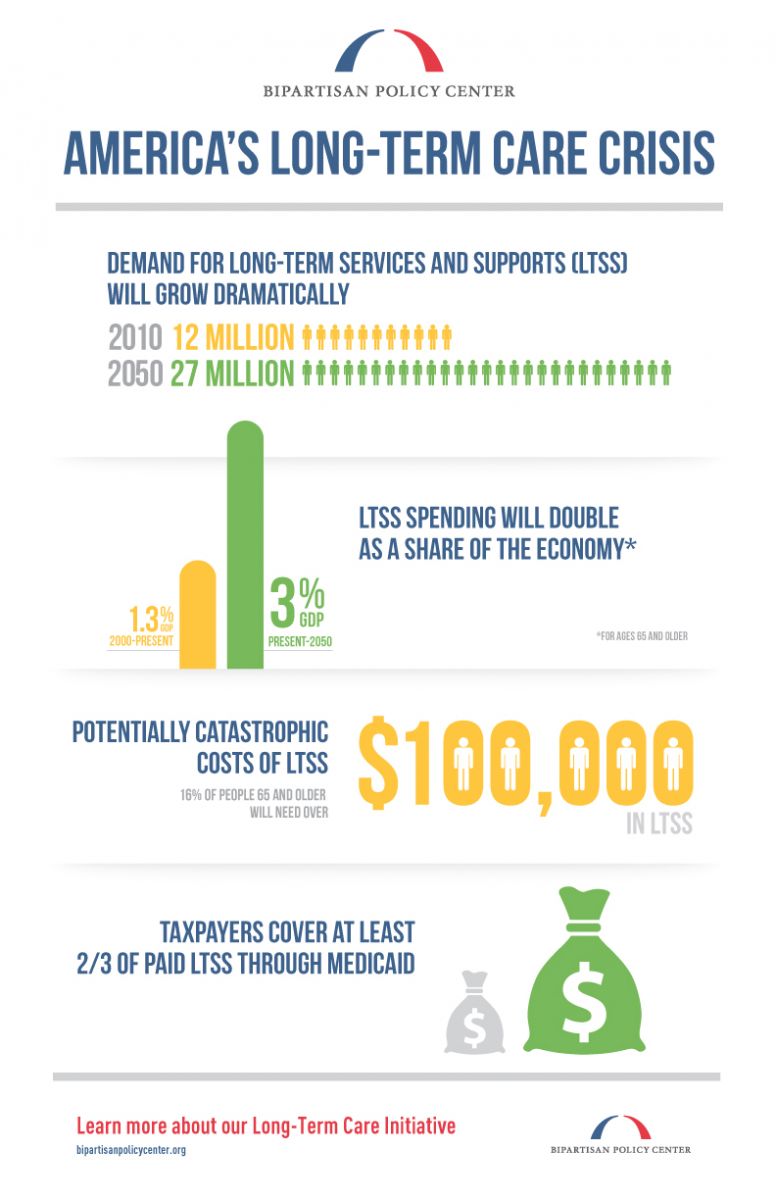 
The Vast Majority of Paid LTSS Comes From Medicaid

The majority of LTSS has been, and continues to be, unpaid and delivered in the home by family members and friends. However, people turn to paid care when the level of need exceeds what volunteers can do, or when unpaid caregivers are no longer available to meet those needs. Because paid care can be expensive, and very few Americans are covered by private long-term care insurance, spending on paid LTSS is dominated by the government. Each year, public programs spend over $100 billion on LTSS, compared to around $7 billion by private insurance. Individuals spend tens of billions of dollars more out-of-pocket, often until they exhaust their assets, their LTSS bills overwhelm their income, and they qualify for Medicaid, a means-tested safety net program which covers two-thirds or more of all paid LTSS. Many people are unaware that Medicare does not pay for LTSS. This process of impoverishing oneself and ultimately relying on Medicaid-paid LTSS is known as “spending down.” Even middle-class and upper-income Americans are at risk of spending down into Medicaid if they develop expensive LTSS needs (such as many years of nursing home care due to Alzheimer’s disease) and have no or insufficient private long-term care insurance. This financing arrangement is not sustainable; in the coming decades, governments will be stretched to meet a variety of commitments related to the aging of the population, let alone the growing demand for LTSS.

Because only a small percentage of individuals will need very expensive, paid LTSS, many observers believe that this risk could be met efficiently by insurance. Yet, the private long-term care insurance (LTCI) market has remained small (of Americans over 65 with annual incomes above $20,000, only 16 percent carry private LTCI). Many carriers have left the market and many existing policies have been subject to major premium increases. Other reasons for the underachievement of private LTCI include the high cost and complexity of the product, medical underwriting (some who want to buy do not qualify), lack of awareness and/or planning for retirement and aging-related needs, and the challenge of making correct assumptions to price a product that, if purchased today, will not likely be used to pay for care for 20 to 30 years. If these challenges could be addressed, greater private LTC insurance coverage has the potential to allow individuals to avoid impoverishment due to LTSS costs and to reduce reliance on the Medicaid program, saving money for governments and families.

More Services Delivered at Home, but Integration is Lacking

Compared to financing, there is considerable agreement on how LTSS should be delivered ? preferably at home and in the community rather than in an institutional setting, such as a nursing home, if that setting is desired by the individual and most appropriate for his or her needs. Many states have taken steps to provide home- and community-based services (HCBS) through waivers for Medicaid-eligible individuals, and, in recent years, new state options have been made available to provide these services. Yet despite considerable movement towards HCBS, there continues to be tremendous variation in the availability of these services from state to state, and much remains to be done to shift care away from institutional settings when appropriate. LTSS delivery is also highly fragmented, lacking coordination across services and providers and often provided in ways that is inefficient, expensive, and not meeting the needs of the patient. The planning and organization of LTSS is also often handled separately from health care planning, so that when a patient is transitioning from acute or post-acute care to an LTC setting, fewer incentives are in place for health care providers to integrate LTSS into their plan for the patient. Initiatives to test new payment and delivery models could assist in integrating health care and long-term care services by building in the necessary financial incentives to achieve patient-centered health outcomes and a seamless continuum of care.

BPC’s Long-Term Care Initiative co-chairs, advisors, and staff believe that developing a realistic, politically viable set of policy options is not only achievable, but is also imperative to relieve pressure on persons who need LTSS, their families and caregivers, and local, state and federal governments. Due to many factors, including the disparate nature of the population in need of LTSS and the current political and fiscal environment, it is extremely unlikely that a single policy solution will adequately address these challenges. In the coming months, BPC will produce a set of policy options that will seek to optimize the roles of publicly funded programs such as Medicaid, private insurance products, and the care provided by LTSS providers to control costs and improve the quality of LTSS financing and delivery. We welcome guidance from stakeholders and policymakers as work on the Long-Term Care Initiative continues.