After years of negotiations, on July 14, 2015, the United States and its international partners reached agreement with Iran on a comprehensive deal to constrain Tehran’s nuclear program. “[T]he initial mutually determined limitations described in this JCPOA (Joint Comprehensive Plan of Action) will be followed by a gradual evolution, at a reasonable pace, of Iran’s peaceful nuclear programme,” reads the text of the agreement, “including its enrichment activities, to a commercial programme for exclusively peaceful purposes, consistent with international non-proliferation norms.”

Despite the historic agreement, the challenges have not ended now that a deal has been achieved. Rather, a new set of challenges now emerge: U.S. policymakers charged with implementing the deal will have to interpret the parameters of the agreement, particularly as they pertain to sanctions relief. This is due to the ambiguous nature of the sanctions relief promised to Iran under JCPOA: it stipulates that as part of a comprehensive agreement the United States would lift all “sanctionsrelated to Iran’s nuclear programme, including steps on access in areas of trade, technology, finance, and energy.” This characterization is imprecise and unreflective of the complexity of the multi-layered sanctions regime that the United States has built over the last 36 years.

The sanctions against Iran have been implemented over decades, beginning in 1979, when President Jimmy Carter issued the first executive order sanctioning Iran in response to the hostage crisis. U.S. sanctions have been designed to punish Iran not just for its nuclear proliferation activities but also for human rights violations, funding of terrorism abroad, and development of dangerous weapons technology. Thus, of more than 20 distinct legislative and executive sanctions against Iran, only approximately 5 percent are clearly and simply categorized “nuclear-related” and up to 45 percent can be considered to demonstrably have no ties to the nuclear program whatsoever. The remainder?nearly half?represent either indeterminate sanctions or “hybrid” ones, targeting a variety of entities for myriad and overlapping reasons. 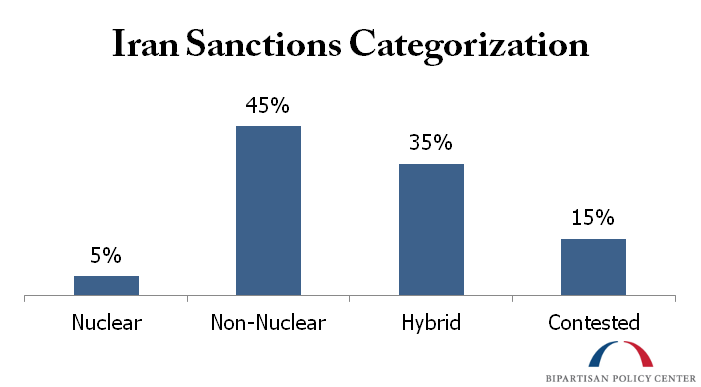 Similarly, there is ambiguity when you examine the entities?individuals, government and military officials, and corporations?that have been targeted by U.S. sanctions. Most entities are sanctioned for several reasons, complicating the process of offering sanctions relief. And while nearly half of sanctions can be classified as non-nuclear, only 16 percent of entities are sanctioned for solely non-nuclear reasons. This means that it is not only the laws themselves that will have to be interpreted by policymakers, but also their implementation. 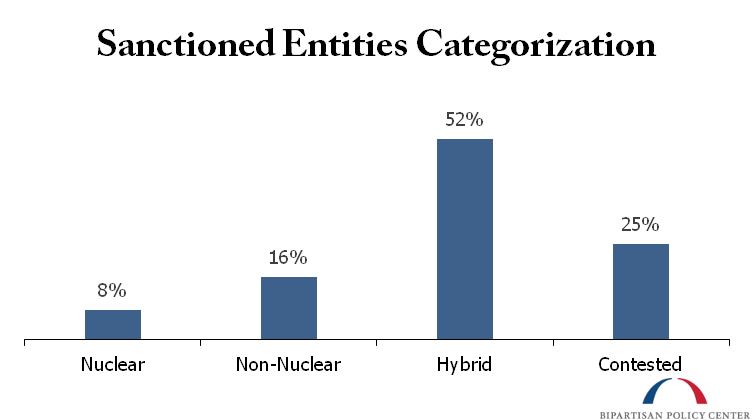 To avoid delay or, even worse, unnecessary leniency, in granting Iran sanctions relief, Congress and the administration must develop a list of which sanctions qualify as “nuclear-related” and could be lifted under the terms of the JCPOA.

There are certain sanctions that are clearly and explicitly targeted at Iran’s nuclear program and/or are aimed at hindering any pursuit of nuclear weapons. Under the terms of the JCPOA, this category of sanctions would be lifted. The Iran-Iraq Arms Non-Proliferation Act of 1992, as amended, is an example of nuclear-related sanctions. Under the act, any nation or person who assists Iran in acquiring weapons of mass destruction (WMDs) may be sanctioned. As the final deal limits Iran’s ability to produce a nuclear weapon, as long as Iran complies with the terms of the agreement, sanctions on Iran’s nuclear program are now redundant and unnecessary.

Some sanctions are explicitly non-nuclear, and these sanctions will remain in place under the JCPOA. This category includes sanctions levied as a result of legitimate concerns about Iran’s behavior unrelated to the nuclear program, focused mainly on Iran’s support for terrorism abroad and domestic human rights violations.

Iran has a history tainted by relationships with groups such as Hezbollah, al Qaeda, and the Palestinian Islamic Jihad, and Iranian government institutions have been sanctioned for these ties. Executive Order 13224, issued by President George W. Bush in response to the 9/11 attacks, has been used to impose sanctions on a number of Iranian individuals and institutions. Officers of the Islamic Revolutionary Guard Corps, shipping and airline services, and even corrupt charities have been sanctioned for supplying money, weapons, transportation, or training to various terrorist groups.

The Iranian government has also been criticized for oppressive behavior such as denying access to the Internet, silencing opposition leaders and protesters, and restricting media and press. In particular, the government’s actions during the 2009 presidential election protests, known as the “Green Movement,” were widely denounced. “The United States and the international community have been appalled and outraged by the threats, beatings, and imprisonments of the last few days. I strongly condemn these unjust actions,” President Obama said in 2009. President Obama’s response was Executive Order 13553, which imposed sanctions on top Iranian officials for human rights violations in response to the protests.

These sanctions, and others like them, have no relation to a nuclear deal, and will remain in place under the JCPOA.

While some sanctions are clearly targeted, a majority of them are more expansive. In these cases, it is especially challenging to analyze and determine which sanctions can be lifted. Hybrid sanctions include those that target a myriad of motivations and sectors, and are not easily separable into those that are and are not nuclear-related. According to the Bipartisan Policy Center’s (BPC) analysis, the majority of sanctions fall into this category.

One particularly broad law is the Comprehensive Iran Sanctions, Accountability, and Divestment Act of 2010 (CISADA). In addition to sanctions aimed at stopping proliferation, the legislation also targets those “complicit in human rights abuses” and strengthens “efforts to combat unlawful or terrorist financing.” Moreover, its proliferation-related provisions include: “acquiring or developing chemical, biological, or nuclear weapons or related technologies; or acquiring or developing destabilizing numbers and types of advanced conventional weapons.” Since this law clearly targets Iran’s nuclear program and aims at preventing Iran from acquiring nuclear weapons, it would appear that these sanctions would be lifted in a final deal. However, the same law also imposes sanctions due to support for terrorism and human rights abuses, which should not be lifted. This expansive quality of hybrid sanctions, targeting a wide range of activities, makes it difficult to determine whether or not they would be required to be lifted.

More ambiguous than hybrid sanctions, this category includes sanctions with a purpose and/or target that cannot easily be categorized as nuclear-related or not. One example is the Iran, North Korea, and Syria Nonproliferation Act (INKSNA), which targets “the development of nuclear, biological, or chemical weapons, or of ballistic or cruise missile systems,” raising the question of whether or not ballistic missile development should be considered nuclear-related or not. Chief U.S. negotiator, Assistant Secretary of State Wendy Sherman, suggested that the administration sees ballistic missiles sanctions as nuclear, and that there would be no more need for such sanctions under a comprehensive agreement.

Both arguments seem reasonable, but the ambiguities are enough to make it unclear whether the sanctions fall into the category of those to be lifted.

The Dangers of Leniency

One way to deal with the ambiguity about which sanctions meet the test of being nuclear-related is to err on the side of generosity: if in doubt, lift the sanction. After all, some might reason, with Iran’s nuclear program constrained by a comprehensive agreement, the major source of U.S. concern will be addressed. Iran, too, would obviously prefer that as many sanctions as possible be lifted.

The generosity strategy is not the way to go. Iran is unlikely to change its past behavior, and will likely continue to fund and fuel instability and conflict in the Middle East. Some of the economic recovery and direct cash injection that sanctions relief will bring to Iran could be channeled into pursuits that harm U.S. interests.

Economic recovery is Iran’s end goal in a nuclear deal and ideally the money will be used for that purpose, but there are no guarantees. This uncertainty can be somewhat controlled by lifting only the appropriate sanctions. In short: the more sanctions we lift, the more resources Iran will have to devote to destabilizing and dangerous policies. Ensuring that Tehran does not receive more than it is entitled should be a priority for policymakers.

Congress has a crucial role in reviewing and approving the agreement with Iran. Congressional authority in this area comes from the fact that many of the sanctions against Iran were put in place by Congress and, therefore, must be lifted by Congress. This dynamic gives Congress an important say in determining which sanctions meet the nuclear-related standard and should therefore be lifted.

Avoiding ambiguity and conflict when it comes time to implement the deal will require taking steps to create a process for categorizing sanctions as either nuclear-related or not. BPC recommends a process that brings together lawmakers from the relevant committees and their staff with representatives of the White House and State Department to develop a list of which sanctions meet the nuclear threshold and would be lifted. This would ensure that when it comes time to grant Iran sanctions relief, the necessary legislative process will proceed smoothly.

The administration should include Congress in determining how to classify measures for the purpose of sanctions relief. If it does not, legislators have several options for motivating such cooperation from the executive branch. One option is passing a Sense of Congress resolution with its own classification of sanctions, which might signal to the White House any potential areas of disagreement in interpretation of sanctions that might stymie the implementation of the deal. To make a bigger statement, another option is passing legislation that reclassifies all existing legislative-based sanctions against Iran as non-nuclear-related. It is uncertain whether such a move would constrain the president from using his waiver authority to grant Iran temporary sanctions relief as he saw fit, but it would provide Congress with a solid legal basis for contesting the legitimacy of such action. Either of these two actions would signal to the White House the strong role Congress expects to play in the implementation of sanctions relief.

BPC analyzed all existing sanctions against Iran to determine whether they were nuclear-related, non-nuclear-related, hybrid, or contestable. The below table summarizes our findings. It shows that, to fulfill the comprehensive agreement with Iran, Congress and the White House will have to reach agreement on the classification of 50 percent of Iran sanctions.