If Congress passes another short-term, say one-to-three month, continuing resolution (CR) to fund the government – presumably while they continue to hammer out the details of a larger appropriations deal –  one key question will be whether the continuing resolution triggers a sequester for Fiscal Year 2018 (discretionary spending).

The answer is yes it would, but the sequester (or automatic, across-the-board spending cut) would be quite small. It would also be the first defense sequester since FY2013.

As shown in Figure 1 below, for both defense and non-defense spending, continuing resolution funding levels would be slightly above the revised Budget Control Act caps for FY2018. If Congress passed another CR for the remainder of  FY2018, a sequester would automatically be triggered, cutting about $2.489 billion from discretionary defense and $2.109 billion non-defense spending. This cut, when annualized, would represent a 0.45 percent cut to the discretionary base defense spending versus continuing resolution funding levels. 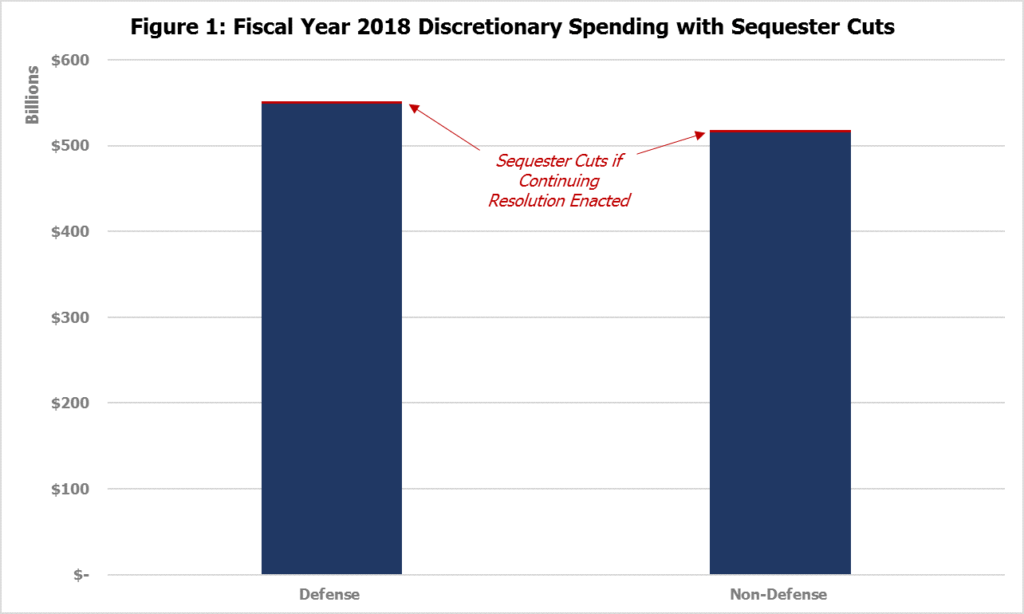 The September continuing resolution did not trigger a sequester, even though the spending levels prescribed in that CR were above the Budget Control Act caps. So, what happened?

The Office of Management and Budget (the agency which evaluates the necessity of a sequester, based on statute) is not required to release a sequestration report until 15 calendar days after the end of a congressional session. Therefore, even though the September continuing resolution prescribed spending levels above the Budget Control Act caps, the agency tasked with implementing a sequester is not legally required to do so until January, when the 15-calendar-day requirement kicks in.

Possible Consequences of this Sequester for Defense

While it would be a small cut in percentage terms (especially when compared to the FY2013 cuts, which were of a different order of magnitude), the Secretary of Defense, the Chairman of the Joint Chiefs, and the other leaders of the service branches have all strongly spoken out against a flat defense budget or funding cut. Defense Secretary James Mattis stated earlier this year that he was “shocked by what I’ve seen with our readiness to fight. ? It took us years to get into this situation. It will require years of stable budgets and increased funding to get out of it.”

It is also worth noting that both the continuing resolution funding levels and the funding levels prescribed by the Budget Control Act are wildly out of sync with the recently passed National Defense Authorization Act, which authorizes base defense spending at about $626 billion (that’s about $75 billion higher than CR levels). But that inconsistency is a topic for another blog.

Cold Weather Ahead for Defense Hawks?