According to the latest U.S. Customs and Border Protection (CBP) data, apprehensions of Central American children and families at the U.S.-Mexico border so far this fiscal year are double the total over the same period in FY 2015, and nearly match record-setting FY 2014. The “summer surge” of 2014 overwhelmed federal authorities at the border and surfaced serious questions about the shortcomings of the immigration enforcement system. This year’s surge could once again put that system to the test and add to the ever-increasing immigration court backlog.

BPC has been tracking the apprehensions of Central American children and families in a series of blog posts. 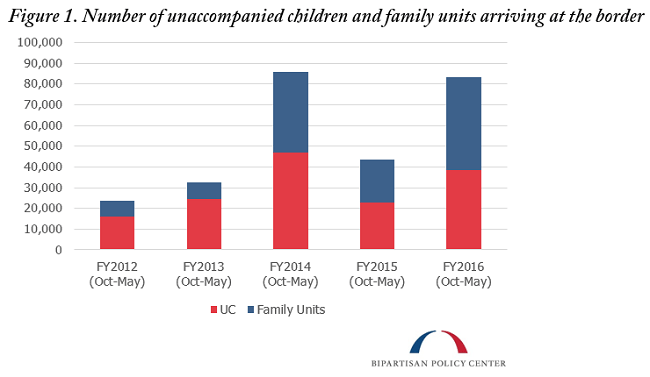 The most recent statistics available for the current fiscal year (October-May) show over 83,000 unaccompanied Central American children and individuals in family units have been apprehended at the southern border (Figure 1), compared to 43,600 in FY 2015 and nearly 86,000 in FY 2014. Previous years’ data suggest migration spikes during summer months. In FY 2014, apprehensions reached their highest levels between May and July. If the seasonal trends hold this year, FY 2016 could go on to meet or surpass the record numbers seen in FY 2014.

Such a surge would mean daunting problems for the ever-increasing backlog in under-resourced immigration courts because current law governing the processing of unaccompanied minors from noncontiguous countries all but guarantee that their cases are heard before an immigration judge. Currently, there are around 454,000 total pending cases before immigration courts, with an average wait time of 662 days (Figure 2). 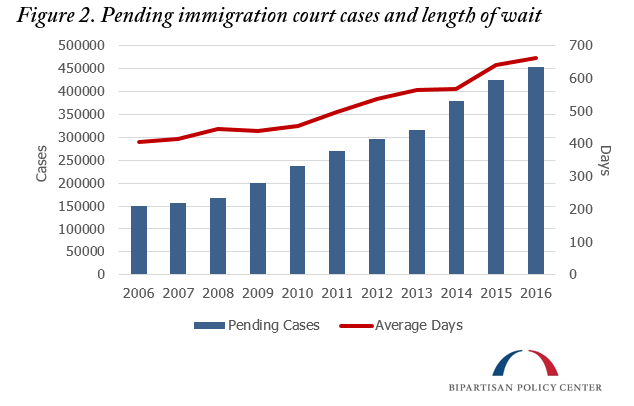 NOTE: Individuals from the Northern Triangle countries of El Salvador, Guatemala, and Honduras make up about half of the pending cases in immigration courts. Source: TRAC.

Although children are given priority processing in the courts to make their cases against being sent home, it can still take over a year before cases are considered. In fact, substantial backlogs exist in cases involving children for each of the past few years. Around 64 percent of cases that began in FY 2015 and 44 percent of the cases that began in FY 2014 are still pending. This year’s apparent surge spells trouble for the courts’ ability to make substantial progress on this backlog without major changes to the system or an infusion of resources. 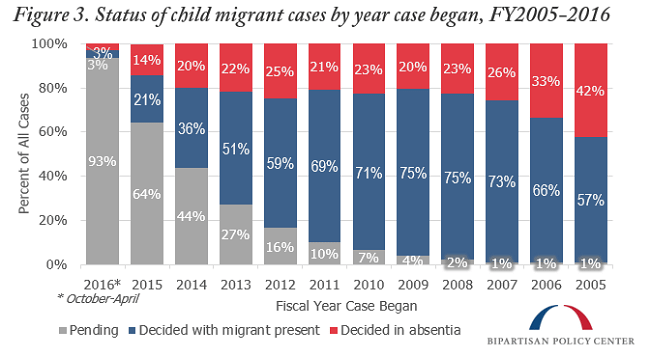 Another problem with lengthy backlog delays is the potential to increase the number of cases decided in the absence of the defendant. There can be various reasons for a defendant not appearing for their hearing date, particularly for unaccompanied minors: some never receive a hearing notice after relocating from temporary housing, some cannot make the often long-distance trip to appear in immigration court, and regularly the system simply loses track of minors, who are under no obligation to stay in one place. Thus, a reinforcing loop is created: surges of migrant children create a backlog, the backlogs mean that children have years-long waits before decisions are made on their cases, and the delays encourage more migrants to seek shelter in the United States.

There has been vigorous debate over the administration’s strategy of “raids” to remove those denied asylum in an effort to deter additional migration. However, delays in the court cases can also make the asylum process more difficult, as attorneys may move to other cases, and the details that prompted flight to the United States may be harder to document over time, in addition to the increase in court no-shows.

Surges of migrant children create a backlog, the backlogs mean that children have years-long waits before decisions are made on their cases, and the delays encourage others to seek shelter in the U.S. 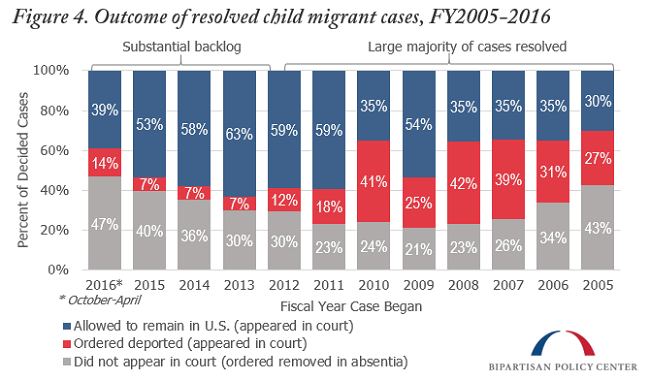 The arrival this year of a similar or higher number of Central American children and families than FY 2014 could test our border and immigration systems once again. The newly arriving migrants will exacerbate the system-wide backlog, lengthening the time for cases to be heard and damaging the chances that they will be adjudicated in a timely or fair manner. In addition to the complex push factors in the Central American region, including violence and poverty, our systems inability to keep up with the numbers is also serving as a significant pull factor for additional migration as the majority of migrants that have arrived in recent years are still living in the United States. These trends continue to highlight the need to address the whole of the immigration system for dealing with similar migration crises.