By Loren Adler and Shai Akabas We have spent a lot of space on this blog discussing the details of the Budget Control Act’s (BCA) sequester that is set to take effect on January 2, 2013, but one important aspect that has not received enough attention is the unique form that the sequester takes for fiscal year (FY) 2013. As we explained in our previous post, the sequester is split evenly between defense programs (function 050) and non-defense programs (every budget function besides 050) for each of the nine years from 2013-2021. This works out to approximately $55 billion in annual cuts to each of defense and non-defense. While the defense cuts fall almost exclusively on discretionary defense accounts, the non-defense cuts are distributed among discretionary programs, Medicare providers, farm programs, Affordable Care Act exchange subsidies, and other smaller mandatory programs.

In every year of the sequester aside from FY 2013, the discretionary cuts to both defense and non-defense are implemented by reducing the original BCA caps on those appropriations, squeezing the dollar amount that Congress can spend.

The first year of the sequester, however, is implemented in an entirely different fashion. There are no new caps that replace the original BCA limits. Rather, the required dollar amount of cuts to discretionary appropriations ($55 billion in defense and $39 billion in non-defense) will be proportionally implemented across the board to each individual non-exempt program on January 2, 2013, regardless of the levels that Congress chooses to appropriate for discretionary spending. This is a key and often misunderstood point.

With regard to the particular cuts, because discretionary funds are being sequestered directly ? rather than being subjected to a topline cap ? a few additional exemptions (in addition to the mandatory program exemptions that apply to all sequester years) become relevant for FY 2013. In particular, programs run by the Department of Veterans Affairs and Pell grant funding, which primarily fall under non-defense discretionary (NDD), are exempt from the sequester. Plus, community and migrant health centers and Indian health programs cannot be cut by more than 2 percent.

While not explicitly exempt, we also assume that President Obama will utilize the power provided to him by the BCA to exempt military personnel accounts from the defense discretionary sequester since the administration has strongly suggested an intention to do so. Therefore, in order to achieve the required dollar amount in cuts from defense and non-defense discretionary spending for FY 2013, other discretionary programs would be cut by a higher percentage than they would have been without the exemptions.

There also is additional spending outside of the normal discretionary caps that would be sequestered in FY 2013. For defense, the projected $85 billion in unobligated balances from previous years are subject to the sequester. And for non-defense, spending on program integrity and disaster funding would be subject to the cuts.

One large consideration ? whether funding for Overseas Contingency Operations (OCO), such as the wars in Iraq and Afghanistan, is exempt ? however, is unclear. While the Office of Management and Budget (OMB) has indicated that this war funding will be subject to the sequester, we assume that policymakers will pass legislation to explicitly exempt it. If it were subject to the sequester, OCO funding could face roughly an $8 billion cut, depending on how much is appropriated. With foreknowledge of the sequester, however, Congress could increase appropriations for OCO such that this spending ends up at the desired level.

The tables below spell out the percentage cuts faced by non-exempt programs under a few different scenarios: 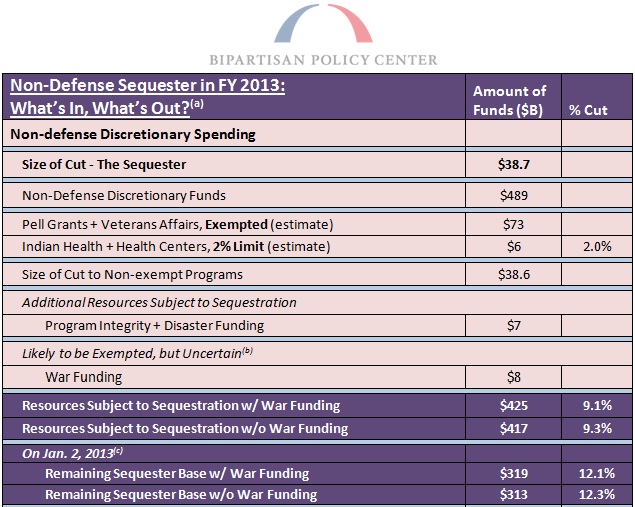 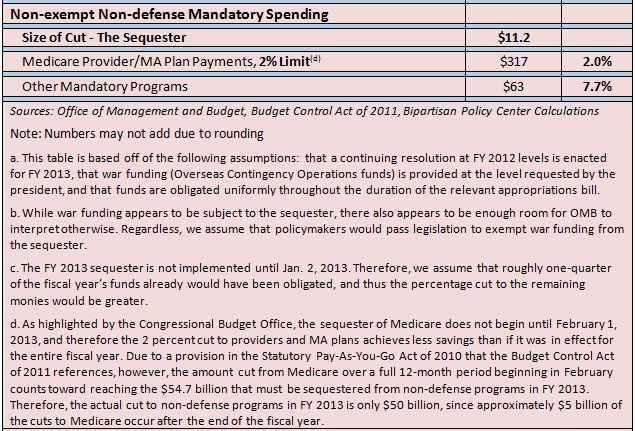 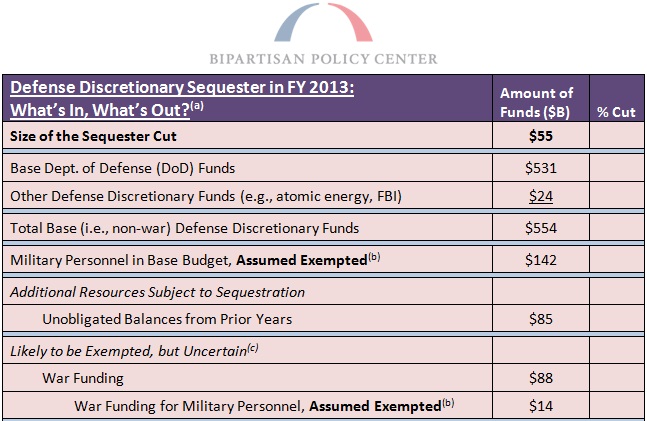 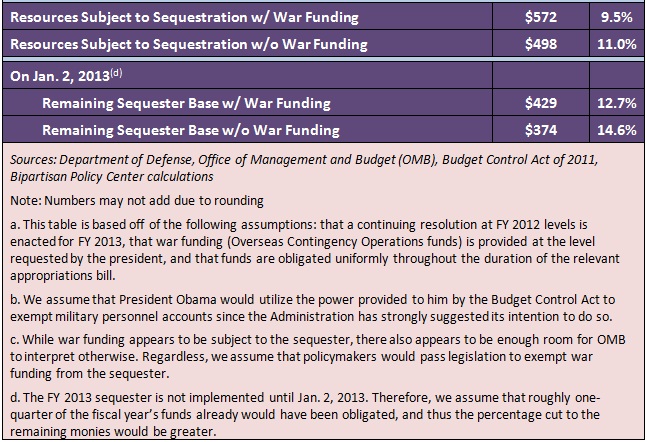 Furthermore, with the cuts slated to occur three months into the fiscal year, this will create massive uncertainty for government agencies if changes to the sequester continue to be negotiated during this year’s Lame Duck session. Department heads will be forced to allocate funds without knowing their full budgets for the year. Operating the federal government in this fashion is irresponsible and a recipe for disaster.

Congressional leadership either should agree to allow the sequester cuts to take place or, better yet, replace the sequester with an equivalent or greater amount of deficit reduction that actually tackles the true drivers of our debt ? entitlement spending and a complex tax code that raises too little revenue. Such a compromise would provide certainty, show that the two parties still can occasionally work together, and prevent these draconian cuts to defense and non-defense programs ? in other words, a “win, win, win” that everyone should get behind.

* Once the sequester was triggered, the original BCA caps ? categorized as “security” and “non-security” ? were revised into caps on defense funding and non-defense funding. (See here for a primer on the distinction.) The rearrangement was done in such a way that total discretionary funding still is capped at the same level.